Q To what extent were you familiar with the internal situation of the Soviet Union and behind the iron curtain?

A. I stem from a very political clan in Iceland. My grand cousin was the founder and leader of the Trade Union movement and the Socialdemocratic Party for more than 20 years (1916-38). My father was leader of the Trade Union Movement for 20 years (1954-74), and briefly leader of the Socialdemocratic Party. My uncle studied in Paris, Berlin and Rome after WW1 and worked for the League of Nations. My oldest brother was the first person from Western Europe after WW-ll to graduate from Moscow University and did postgraduate work in Poland (1954-61).

END_OF_DOCUMENT_TOKEN_TO_BE_REPLACED

From Reykjavík to Riga – Greetings and congratulations on the occasion of Latvia´s independence celebration.

Let us ask ourselves a simple question: Have the expectations of  the pioneers  of the independence movement been realized? Observed from afar, the answer to these questions seems in the main to be a positive one.

You have certainly consolidated your democratic institutions.

You have integrated your economy with the internal market of the EU- the largest free trade area in the world – and with the international commercial system.  And, last but not least, you have taken out an insurance policy against potential future agression by joining both NATO and  The European Union. Those are no mean achievements.

END_OF_DOCUMENT_TOKEN_TO_BE_REPLACED

Jón Baldvin Hannibalsson, the former Foreign Minister of Iceland, in an interview with Taavi Minnik on the failure of Western leadership to establish a sustainable global order.

END_OF_DOCUMENT_TOKEN_TO_BE_REPLACED

Yesterday in Riga we had very warm celebrations of the restored independence of my country. Thank you for being with us on this very special day.

In the afternoon your greetings were transmitted in a special edition of the main public TV channel – LTV. Please find:

When introducing a journalist praised your country for being the first to recognise our restored independence in 1991 and the fact that you as a Minister of Foreign Affairs dared to visit the Baltic capitals during the days of barricades in January 1991.

„Western policy makers acknowledged that the collapse of the Soviet Union was a unique opportunity to help freedom take root in Russia and Eurasia. At the same time, there were also enormous risks involved“.

Stephane Kieninger in „Money for Moscow: The West and the Question of Financial Assistance for Michael Gorbachev(in „Exiting the Cold War –Entering a New World“, eds.Hamilton and Spohr, Johns Hopkins University).

THE FALL OF THE BERLIN WALL in 1989 was a momentous event. It happened almost by accident. A misunderstanding between a low level East German official and his superiors made it possible. This started a chain of events which changed history. This was neither foreseen, preplanned nor ordered by higher authorities. 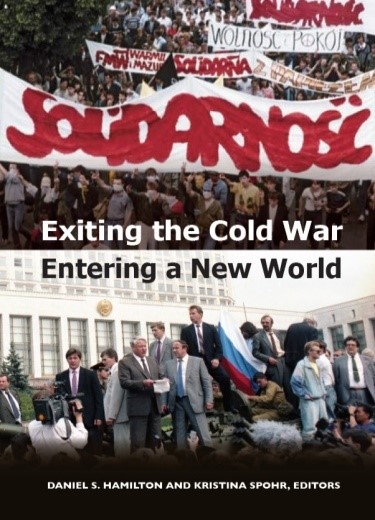 This was „peoplepower“ in action. One event led to another. Two years later, the once mighty Soviet Union no longer existed. It simply dissolved peacefully – not with a bang, but a whimper. Noone could have foreseen this, although the ailing symptoms of the lethargic empire had long been evident. The man who wanted to heal the patient – reform the system – Mikhael Gorbachev, was instead engulfed by the chain of events and dissappeared with it.

END_OF_DOCUMENT_TOKEN_TO_BE_REPLACED

Interview with Draugas; the Lithuanian World Wide News, published in Chicago for the Lithuanian diaspora. Draugas is read not only in the United States, but also in Canada, South America, Australia, Europe and Lithuania.

A: The first contacts were made in early 1989. I assumed the post of Minister for foreign affairs and external trade in September 1988 – a position I held until mid-year 1995. The Estonians came first. Endel Lippmaa, a distinguished biophysicist was the first one. Next two representatives from Sajudis, Emanuelis Zingeris, a long time chairman of the Seima‘s foreign affairs committee and Ramunas Bogdanas, special foreign affairs advisor to Landsbergis, came to Iceland, having first solicited support in Norway. They were well received.

END_OF_DOCUMENT_TOKEN_TO_BE_REPLACED

The debates in the primaries of the democratic presidential candidates so far have led to one startling conclusion: The Nordic socio-economic model has become the utopia – the promised land – for what was once a land of opportunity – America.

Listening to the leading candidates – Bernie Sanders certainly and to some extend Elizabeth Warren – the proposed solutions to the malaise of Americans in the era of neo-liberalism, is to emulate the Nordic model. Denmark has become the favorite example. Norway deserves no less of an attention, especially when it comes to utilitation of natural resources. And both Sweden and Finland have been highly successful, during the era of globalisation in their chosen fields of specialisation. In his paranoia, caused by China‘s competitive edge in 5G, President Trump has proposed that Americans gain control of Ericson and Nokia, Scandinavia‘s high-tec companies. Not to forget his proposal to buy Greenland to preempt China‘s advance in the high-north in the age of climate change.

Why is it that pretenders to the American presidency are looking to Scandinavia for solutions to their social problems? It is because of their generally acclaimed success. One witness, the Economist, in a special survey on the Nordic model, came to the conclusion that the Nordic model is „the most successful socio-economic model on the planet, during the era of globalisation. It combines both efficiency and equality. It is both the most competitive and egalitarian society on earth.“

END_OF_DOCUMENT_TOKEN_TO_BE_REPLACED

A speech given at a Gala dinner of the Lithuanian Bar Association, December 7th, 2018, in Vilnius on the occation of the 100th Anniversary of the Association.

Let me be a bit personal in what I am going to say to you here tonight.

I was born and raised in a small fishing village in North-Western Iceland, hinging on the Arctic cirle. The winters are dark. The summers are bright – and we have learnt to adapt our way of life to the rythm of the seasons. Most men are out at sea, most of the time. Every young boy´s dream is to become a captain on his own boat. I never made it – apart from summerjobs on trawlers – to finance my university education. The women take care of most things on land, from bringing up the children to running the daily business. To survive in those surroundings you have to be self-reliant and – stubborn.

My father had studied in Denmark at a Teachers´Training College. When he returned back home – at the outbreak of the Great Depression – he started an elementary school for poor children. In times of high unemployment most families could not afford to send their kids to school.

END_OF_DOCUMENT_TOKEN_TO_BE_REPLACED

An interview with Jón Baldvin Hannibalsson, former minister for foreign affairs of Iceland, by Linas Jegelevicius.

Q. On the cover of your new book „The Baltic Road to Freedom – Iceland´s Role“ the publishers say that you „took the lead in soliciting support for the Baltic Nations´ restoration of independence“. Isn´t this an exaggeration,forgive my bluntness?

A. To answer this question I prefer to let the facts speak for themselves. Western reaction to the restoration of independence of the Baltic states was first officially put to the test at a CSCE-conference in Copenhagen in June 1990. In attendance were all the foreign ministers of Europe and North-America. This was one of a series of high-level meetings on disarmament and inter-state relations after ending the Cold War. The foreign ministers of all three Baltic states (Meri, Jurkans and Saudargas) had been invited to plead their case. When they arrived the Soviets said: „Get them out – or we are out“. The Danish hosts capitulated. The only foreign minister of the 37 present to protest and take up the Baltic case was the Icelandic one. My spontanious speech is in the book. This was the first time I lent my voice officially to theirs, which had been silenced. I continued to do so in international fora, not the least within the UN, NATO and CSCE – till the very end. In January 1991, when Moscow had decided on a crack-down by force, Landsbergis issued an appeal to NATO foreign ministers to arrive in Vilnius to demonstrate support. I was the only one who responded and arrived on the scene. In August 1991, after the attempted coup d´état in Moscow had failed, there was a power vacuum in the Kremlin and confusion in the West. I used this window of opportunity to invite Meri, Jurkans and Saudargas to Reykjavík, where we formalised Iceland´s recognition of the Baltic States´ independence. If Iceland didn´t lead, other states certainly followed. The US managed to do it a day ahead of the Soviet Union.

END_OF_DOCUMENT_TOKEN_TO_BE_REPLACED

The Nordic model vs. the neoliberal challenge